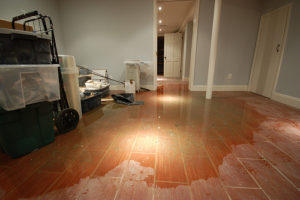 Pretend, for a moment, that it’s spring in Lee’s Summit (yes, it will come). Pretend snow is deep and temperatures are rising.

The snow will melt, sometimes rapidly, creating lots and lots of flowing water. Add a Lee’s Summit spring rainstorm to the scenario and you may be facing a serious problem.

Where will all this water go? Since the earth is still frozen, it won’t go down. It will follow the path of least resistance, according to Waters Basement Services in Buffalo, NY.

That path typically leads to the home’s foundation and, eventually, to the basement.

Rainwater isn’t the only type of moisture that seeps into basements, however, something as simple as condensation can build into puddles.

Just as condensation forms when cold outside Lee’s Summit temperatures meets warm window glass, so can that same warm air hitting a cold pipes or a concrete foundation create condensation.

Think again. The American Society of Home Inspectors (ASHI) claims that most new homes experience basement leaks within 10 to 15 years of being built.

Worse, excess moisture leads to the development of mold. ASHI experts claim that 60 percent of homes in the U.S. have moisture in the basement and nearly 40 percent of these basements will develop mold.

More than 60 percent of basements in existing homes have basement moisture.

The key to fixing the problem is to figure out where the moisture is coming from.

Searching for the source

First, you’ll need to determine if the moisture is seeping into the basement from the outside or if it’s a result of condensation.

Thankfully, this is easy. When you find moisture on a wall, tape a piece of foil to the location. Leave it on the wall for 24 hours and then check the foil for signs of dampness.

If it’s wet on the outside, then the source of moisture is coming from inside the basement (condensation, most likely). If the underside is wet, suspect moisture intrusion from outside the Lee’s Summit home, according to John D. Wagner at ThisOldHouse.com.

Now you’ll need to pinpoint exactly where the moisture is coming from. Wagner suggests that the most likely areas are where the floor joins the walls. Then, check the ceiling for signs of water intrusion (flaking paint, discoloration, etc.).

Other areas to check for leaks include:

The fix for your wet Lee’s Summit basement depends on the cause. If it’s condensation, airing out the basement may be the cure.

If the source of the moisture is coming from outside the home, the solution may range from filling foundation and wall cracks with epoxy to more expensive tasks, such as:

Kevin Brasler of Washington Consumer’s Checkbook and HouseLogic.com offer DIY solutions to try before calling in a professional.

If that doesn’t work, don’t give up. Moisture can damage the home’s structure and cause mold. If the DIY suggestions don’t cure the problem, call in a Lee’s Summit pro.

Let's Talk!
SCHEDULE A CALL
You may also be interested in...
Are you brave enough to buy a home while engaged?
Whoever coined the phrase “Bridezilla” must’ve been referring to the bride (or groom) who was juggling wedding planning with homebuying....
Is your wood-burning fireplace ready for winter?
Winter brings images of getting cozy in front of a crackling fire. Whether your image also includes a steaming cup...
What you absolutely must know about HOAs
A Sacramento area HOA created a requirement that insisted homeowners keep their garage doors open from 8 a.m. until 4...
close
Come Check Out My List of Vendors
LET'S DO IT!